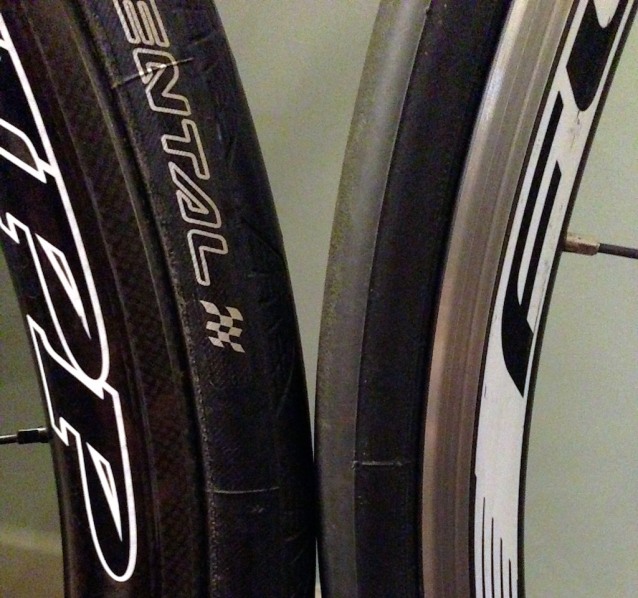 Not aiming to be, nor purporting to be an expert in cycling (one year in, I’m most definitely still a newbie), I am never the less constantly absorbing information, striving to understand, experiencing new things while riding, and always pushing myself harder to get even more out of the sport. I am completely absorbed, entirely committed and never before so enthralled about, well, anything.

One of many investments I’ve made this year was buying new wheels. I’d been told by a variety of sources (including my local bike shop staff and magazines) that, after buying a carbon fibre bike frame and good components, improving the wheels is where a rider will notice the most significant gain in performance. In effect the greatest payoff, or return on investment. They are a physically large part of the machine, they bear the rider’s weight, and they are called upon to respond to riders’ demands. Given these three qualifications, their weight, stiffness, feel and responsiveness all matter greatly when the intention is to cover great distances as easily and quickly as possible. Yet perhaps ironically, bicycles are often sold with inferior wheel sets, presumably to keep the price-tag lower. But publicly, manufacturers state that it is because wheels are very subjective and they want to leave the choice of upgrading to the consumer.

Indeed my Cervelo R3 was sold to me with entry-level Fulcrum wheels, the “Racing T” model, which are evidently so introductory they aren’t even advertised on the Fulcrum website. Looking ahead to the Whistler and Victoria GranFondos I was training for, I wanted to beef up the performance of my rig to give me every opportunity to succeed, and for there to be no excuses other than myself should I  be disappointed in my results.

I did a significant amount of research, including scouring online reviews, reading magazines and talking with bike stores, and I found a myriad of options. One of the principle decisions I had to make was whether to choose aluminum wheels or carbon wheels. As with the bike frame, carbon fibre wheels are flashy, sleek and futuristic-looking instruments that are made by hand and offer the benefits of being extremely light weight and stiff. But, as with carbon frames, they suffer from delicacy in ways that steel and aluminum do not. Torque a carbon fibre tube or wheel in an unintended way and it can be quite easy to break.

Aluminum wheels on the other hand are quite durable, but sacrifice weight for stiffness or vice versa.

Since they were first introduced, one of the knocks against carbon wheels has been their braking performance – particularly in wet conditions when a film of water can infiltrate the brake pads and wheel brake surface, drastically reducing braking efficacy until such a point that friction has evaporated the film. It’s been said that with carbon, the rider needs to anticipate braking much further ahead and expect that the first few rotations of the wheel will not provide any slowing at all, which can be a very disconcerting feeling and potentially unsafe. Furthermore, given carbon’s delicacy, it is inadvisable for the rider to hammer on the brakes under any circumstance since the friction generated between brake pad and carbon surface can transmit heat to the wheel and cause blistering or warping of the wheel, which could ruin it. An entirely new methodology of riding must then be adopted in order to care for these wheels – pulsing or “feathering” the brakes which helps avoid overheating; advanced braking and conservative behaviour in wet conditions; and obviously avoiding significant obstacles like potholes (although this last point is advisable while riding any type of wheel).

Despite these challenges, carbon wheels are still the preferred choice amongst serious enthusiasts, racers and professionals. Evidently the performance gained trumps the extra care and attention needed. And clearly there is an ideology amongst these groups that a carbon wheel set is truly the best compliment (performance- and appearance-wise) for a carbon frame. “Is that carbon?” is among the most common catch-phrases heard in group rides these days.

It was with these thoughts in mind and careful consideration made that I chose to purchase a set of Zipp 202 Firecrest Carbon Clinchers which I got on a great discount earlier this summer. Zipp are generally regarded as one of the top carbon wheel set manufacturers, and their deeper rims (404, 808 models) frequently adorn triathletes and Ironman participants around the world. Their newly redesigned 202 Firecrest model are marketed as the ultimate go-everywhere wheel – amazingly light and stiff for climbing; solid, responsive and reliable for descending; and strong enough to tackle the odd off-road detour. Their smaller rims also provide benefit on long Fondo efforts where cross-winds become a factor. The new Firecrest design gives a wide wheel base that is carried through the rim depth, and offers cutting edge aerodynamics to minimize drag. And perhaps one of their greatest advertisements is durability. The carbon make-up of the braking surface and the proprietary brake pads minimize heat build-up in concentrated areas which limits overheating. Furthermore the carbon layup and design evidently provides class-leading strength for any road surface.

All of this sounds fantastic – what sold me were the lightness, stiffness and proposed durability of the model, plus the minimal profile. Last thing I need is to show up with deep rims only to be dropped by the group 15 minutes into a ride!

So the Zipps were bought and I installed a SRAM Red OG-1090 11-25 cassette to mate with my SRAM Rival drivetrain. The cassette is part of SRAM’s wonderfully light “Red” line-up and is a good compliment to the wheels.

Although the performance improvement was not immediately noticeable, I can tell you that I became noticeably aware of their rigidity and stiffness on long climbs, and their incredible stability on 70+ km/hr descents. And in cross-winds, there was minimal buffeting. Perhaps my greatest ‘ah-ha’ moment was actually transitioning back to my Fulcrums at the conclusion of summer (at the beginning of September, when the rain began) and I felt like I was riding on wet noodles. My sprints weren’t as strong; my climbs felt heavy, and generally the bike felt a touch sluggish compared to before. It was akin to walking on your feet versus dancing on your tip-toes.

I definitely advocate for firm, lightweight rims for any aspiring and dedicated cyclist, but do your homework and make sure you are satisfied with the commitment, investment and challenges that inevitably accompany any and every make of wheel set.