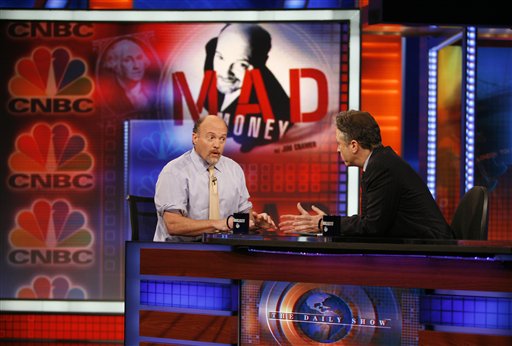 On Thursday, Jon Stewart from The Daily Show was back up to his old tricks. Dismantling, publicly embarrassing, and likely damning a top tv show host on international television.

Some of you might remember his ruthless but plain-talk, burning-at-the-stake dismemberment of Tucker Carlson and the CNN program, Crossfire. Carlson was soon after fired, and Crossfire has since been canceled.

Jon Stewart is a comedian by trade, remember. But a very smart and tack-sharp one. In fact, I’d go so far as to call him immensely intelligent. His act is not schtick. It’s not character (read: Stephen Colbert). It’s dissemination of the day’s news, critique of reality and exposure of the veiled.

Follow this chronology for a compelling story line about the saga that is Jon Stewart vs. Jim Cramer. It might take you half an hour, but it’s worth it (in the name of context):

March 4, 2009: Leading up to this past Thursday, he’d been calling out various show hosts on CNBC. It all began with a fellow named Rick Santelli (watch – starts about 1:30 in – the remaining few minutes of this clip are all part of this story), and Stewart’s abrupt and visceral call-out of the entire network; a network that is disappointing at best when it comes to authority on business.

March 9, 2009: Stewart picked up on the blossoming headlines caused by his Santelli skit and responses from Jim Cramer, host of CNBC’s Mad Money. Stewart effortlessly added his indictment of Cramer (watch). Some of the media coverage of their growing spat can be seen here.

March 12, 2009: It boiled over, as this spat, seen as comedic persecution by Stewart and The Daily Show, and as impotent wash by CNBC, began appearing as headlines on NBC’s Today and various other prime-time American programs. The follow through surprised me and surely others, in that The Daily Show was able to get Jim Cramer to appear on the show tete a tete with Stewart in the same week that all this drama was making the news. The full, unedited interview can be found here.

I have no doubt that Jim Cramer will be, or has already found himself, fired. He’s lost all credibility, and CNBC is undoubtedly undertaking serious PR damage control. They will survive though, and move on to further baffling and indoctrinating the masses for the benefit of their advertisers and boards of directors.

Evidently, the showdown between Cramer and Stewart was the second most-watched episode of The Daily Show in it’s history (see Jon Stewart’s wiki entry). Clearly, Stewart is fearless and wickedly intelligent. I only wish that Cramer had been more of a match. Given his prowess, I’d like to see Jon Stewart take on Bill O’Reilly again, or perhaps Rush Limbaugh or Carl Rove. Fact is, Stewart champions common sense and crafts his messages in the simple tones of reality. So when provided an opportunity to call these people out, they haven’t a leg to stand on.