I wrote a letter to Jim Prentice (Minister of the Environment, Conservative Member of Parliament and my constituency representative in the Canadian government), back in late January regarding the federal budget and the opportunity this recession has provided our government to spend recovery money on advancing Canada’s position in technology, environment and science. For those of you interested in seeing my letter, which I also sent to Michael Ignatieff and Opposition Environment Critic Minister David McGuinty, please see the bottom of this post.

What I got back, whether or not directly related to my letter, was sent to me because I must now be known within his office as a “concerned constituent” or “politically active.” Or whatever. Prentice’s letter was dated July 24 (precisely five months and four days after mine to him) and was a form letter.

Here’s the text from the letter:

“On June 19th, Parliament rose for the summer after a very eventful winter and spring. During this time, our Government made clear that our top priority was taking responsible, effective measures to strengthen and safeguard our economy. I would like to share with you the progress we have made in this area.

First, our Government has laid the groundwork for strong fundamentals by:

– Paying down our debt in good times so we now have more room to maneuver in tougher times.

– Lowering taxes across the board to help make Canadian companies more competitive and to relieve some of the financial pressure felt by families.

– Maintaining prudent regulations for banks to ensure they are strong enough to weather external pressures.

In January, after consultations with the provinces, business leaders, the opposition parties and Canadians, our Government introduced Canada’s Economic Action Plan. It is the largest infrastructure renewal program in half a century. The Plan is stimulating Canada’s economy in order to preserve and create jobs by speeding up investment in infrastructure. Projects receiving support include roads, bridges, transit systems, broadband internet infrastructure, scientific and technological research and development and clean energy projects.

Our Action Plan has received significant support both at home and abroad, exemplified by a recent report by the International Monetary Fund (IMF), which stated: ‘The IMF supports the strong fiscal package announced in January, which was large, timely, and well targeted, and it will buoy demand during the downturn.’

I was happy to see many of you at my Annual Calgary Centre-North Stampede Breakfast. While I have been working and travelling to prepare for the UN climate change conference in Copenhagen this December, I look forward to spending time in the constituency this summer and participating in some of the great events held in our communities. For more information on our Government or to contact me, please visit http://www.jimprentice.ca.&#8221;

The letter wasn’t even hand-signed. It was a jpeg signature, indicated by the pixelation in the letter “m.”

I can’t help but feel that I am a lowly peasant living in a village in medieval England. I feel like we all are. I feel that any Canadian who isn’t running a bank or a big business is merely a pee-on; who goes about their day while our rulers conduct their important matters with corporations and other nations. Every time we speak up we are appeased but not satisfied. We are given our bread which keeps us quiet, and the King continues to wallow amongst aristocrats and converse with his bankrollers. Whenever we speak up we are told that every initiative is by us and for us, though fundamentally, we are brushed aside and ignored.

But nowadays, appeasement does not suffice. Interest groups, activists and lobbyists leverage much more influence and power via the internet and dramatically improved communications amongst opposition parties. In fact, this simple blog post might be picked up by hundreds, if not thousands, of similarly distressed Canadians. Before you know it, you’ll have a communications crisis on your hands that could have been mitigated by actually replying to someone whom you directly represent in government. But don’t go calling now; no sir, it is too late for knee-jerk, reactionary response. Besides, that’s not the character that I want in my representative.

– why are we seeking economic action approval from the IMF rather than that of Canadians? I recall your parliament proroguing rather than facing the music the first time you tried passing a budget this past winter.

– if you’re interested in paying off the debt, why did you slash the GST from 7% to 5%, ultimately reducing the government tax intake by approximately $7 billion per year? Oh, wait, that was so I could save $2.40 off the next pair of shoes I buy. Right.

– show us some proof that ACTION is actually being taken. In all the fields you mention, especially “clean energy,” I’d love to see what you’re doing there. It is your department afterall. Your ‘Plan’ would be more aptly titled, “Economic Ambiguity,” as it seems that you have no interest in connecting the dots for us, and your government has divested all accountability in proving that it has actually resulted in anything. You’ve allocated money, sure. But to what? Let’s see some proof that there are shovels in the ground, as your government has so plainly advocated. Shouldn’t be that hard, and with proof I’m sure you’d see reciprocal votes. Tit for tat.

– I was not at your Stampede Breakfast, which, by the way, apparently featured styrofoam plates and cups. Not great imagery for the Minister of the Environment.

Sir, I am done writing you. If I write you a letter and all I get in return is a photocopy of something one of your staffers wrote and had cleared by the PMO, I won’t bother wasting my time. It is clear that you are representing your government and not your constituents, which is entirely the opposite of your job description. Sensible people see right through your camouflage. Mailing blanket statement form letters do more damage to your communications efforts than doing nothing at all. Moving forward, I will take my protest public and you can deal with the ramifications on your own time. 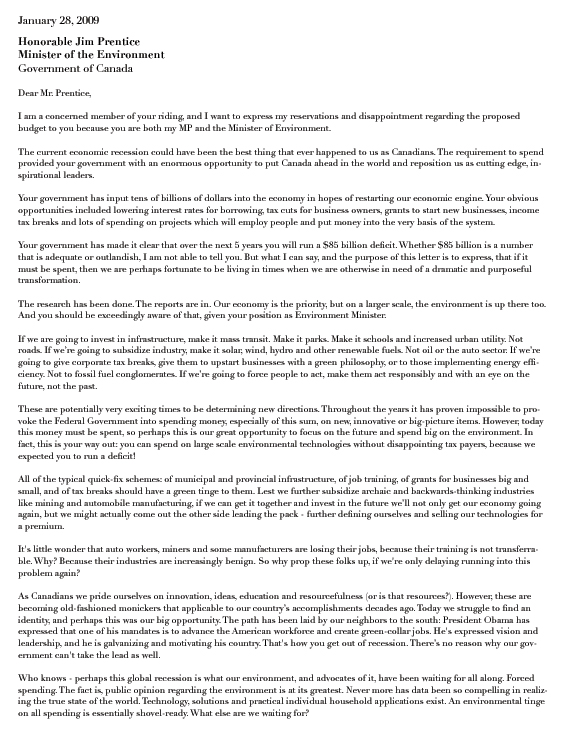