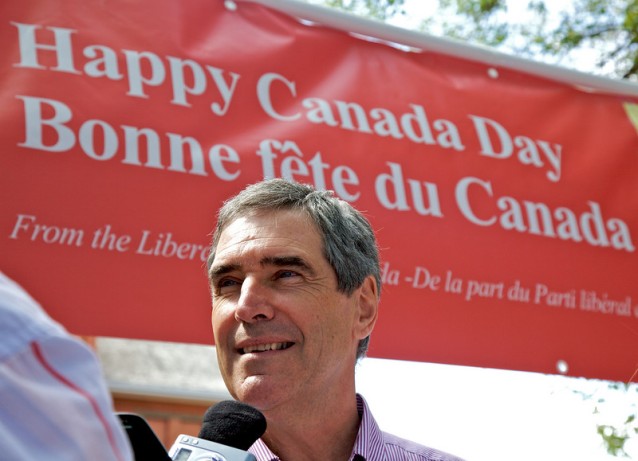 I was off for four days last week, but ended up working six – Tuesday through Sunday. I’d like to say my time off was enjoyable, and it certainly was a nice change of pace in many respects, but I was still working, just on other things.

I was contacted about two weeks ago by Michael Ignatieff‘s ‘people’ and informed that he was coming back to Alberta for stops in Edmonton and Calgary. They wanted me to photograph their events, which of course I accepted. Edmonton was the first leg; spending June 30 and July 1 up there. My contribution started on Tuesday afternoon at a Francophone town hall at an Italian community center (?) with about 100 people in attendance. Also attending were Senators Claudette Tardif and Grant Mitchell, both representing Alberta in the Canadian Senate. The cultural mix was diverse – there were people of Congolese descent, others of Caribbean, and Quebeckers as well. I was somewhat surprised at the turnout – I wasn’t aware there was a strong French-speaking community in Edmonton. It is probably larger than Calgary’s.

From there we walked across the street to a larger town hall that had been assembled, which was a BBQ and fund raiser for the party. Nearly 600 people and some local media showed up to that event, and Ignatieff spoke to the audience about his visions for the country, party solidarity, and about recent headlines and current events. People asked direct questions, he provided direct answers. No beating around the bush. One man stood up and introduced himself as a local organic farmer, and asked something to the effect of, in light of the emphasis on health care and the economy, why the government wasn’t doing more to assist local organic farming industries to support both issues? He said that he was, in fact, hindered in such a way that imported organic goods were provided more tax relief and fewer barriers than domestic goods. Ignatieff’s answer was detailed and sympathetic. You can tell when someone dignifies a question, understands the issue, and sincerely wants to help. This was the case. Nothing glossy, misleading or coached.

Ending at around 9:30 pm, the team and I hopped in a car and went for a bite to eat. We ended up at an Original Joe’s and sat at a table with 12 party supporters and former MP and former Deputy Prime Minister Anne McLellan. She’s a nice woman and has a commanding personality. She’s a dog person – we shared stories about our respective spaniels.

Wednesday, Canada Day, I was up at 7 am for a quick breakfast and an early check-out, and then it was off to the Alberta Legislature for the Ismaili Muslim Canada Day pancake breakfast. Nothing pronounces your visit to Alberta like flipping flapjacks at a free breakfast if you’re a politician. Ignatieff and his lovely wife donned hats, gloves and aprons, and served breakfast for over an hour. Also there was Dr. David Swann, the affable leader of the provincial Liberals and Senator Grant Mitchell once again.

A little while later, he was walking in the Canada Day parade through the old Strathcona community. He was warmly received by some along the route, and not by others… I heard one person yell, “Harper rules!” He’s obviously entitled to his opinion. After the parade, I headed home. I got home in time to cram through some processing and deliver half a dozen pictures to the party HQ in Ottawa.

Saturday, I was at the Calgary Zoo bright and early for Ignatieff’s pancake breakfast. To my surprise over 750 people attended (it’s Alberta, after all). MP Ralph Goodale was there, as were a couple of Senators and several dignitaries from other sectors, including University of Calgary president Harvey Weingarten. Ignatieff’s speech was 30 minutes long and grabbed everyone’s attention for its poignancy and tone. The national media picked it up and labeled it a stump speech – calling out Stephen Harper for his divisive and negative attack ads (especially some aimed at the Bloc, which propose they’re sympathetic to pedophiles), and lack of action on critical issues. It was a good speech and the crowd was predictably satisfied.

The whole experience was great and I am once again very thankful to the organizers for their enthusiasm for my work. I have posted several pictures from these events up on my online photo gallery, www.cdubphoto.smugmug.com.

I’m off to Toronto tomorrow for a few days, including representing my company at a charity event called Boys Night Out. Aside from that, I’ll be at meetings and hopefully wandering the city a bit and getting some good pictures.