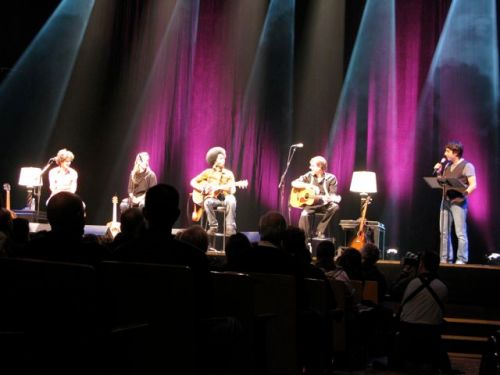 Despite some honest wonderings and naysayers, the big day indeed came. Juno Awards 2008 in Calgary, Alberta.

The artists were divided into two groups, and they each took turns signing some of their favorite songs without accompaniment. The first group was Joel, Alex, Serena and Jeremy (as seen right-to-left above), and they were the most interesting and engaging of the two. Serena Ryder has an unreal voice and she really seemed to dive into her performance deeper than the others. Very Joplin’esque. Alex Cuba brought some serious rhythm that resonated within the audience. Catch a repeat performance of this concert on podcast, as it was broadcasted live and for repeat on CBC radio.

Last night was the big show – the broadcast live-for-TV Juno Awards at the Saddledome. We strolled in past the red carpet and into our seats – the player’s box – two rows down from Mr. Mayor and some federal dignitaries. Feist won a bunch of awards, five actually, which was fun to see but I think it detracted from the potential overall experience given the diversity of nominees. I had the same feeling last year with Nelly Furtado winning everything – it doesn’t fulfill the purpose of the awards to have one person from one genre winning 3, 4 or 5 out of 7 presented awards. At least Feist wasn’t hosting the awards this year, as Nelly did last year. Russell Peters did a great job as host, actually. Really funny – lots of borderline and otherwise intelligent jokes that had the crowd in stitches. One of his best was right off the bat when Peters was hacking on Chad Krueger of Nickleback, wondering how he’d been able to get here given his latest traffic accident charges, and exclaiming, “maybe he should change their name to ‘Getmylicenseback’.”

The performances were all fun, though not as eclectic as those at the Gala Dinner on Saturday. Avril did her pink rock routine, Hedley played their hearts out to all the 16 year old girls in the audience, while Buble played his to every 35 year old.

It was really nice having the Junos in Calgary this year, and I think the city responded well. All of the associated events sold out, and the media attention was fantastic. As the limos leave for the airport and the city cleans itself up, we’ll have to wait and see what legacy remains. I learned a lot about Canadian music this week, though as I said, mostly at the associated events rather than the broadcast show. Bands like illScarlett and singers like Serena Ryder and Alex Cuba have given me a little more to look for next time I’m on itunes. I am proud of this city for embracing the event with open arms, and for publicly acknowledging that music lives here.