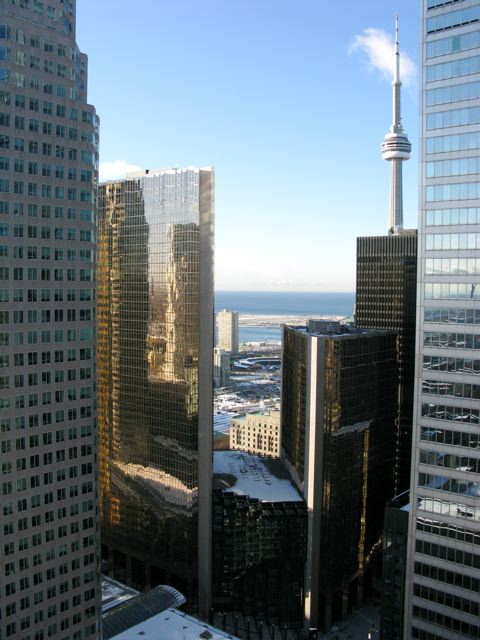 Two days remain in Toronto before I come home. So far it has been a good trip to The Big Gloom – quite a liberating feeling not being tied to my exhibitor booth for 26-odd hours over three days. We’re here for a big trade show called the Gourmet Food and Wine Show that happens every November, and every year we’re a participant – except for this year. You see, our competitors own this show, and this year, despite being more than happy to purchase our booth space, they told us we could not take part. Not very collegial, but I guess that is entirely their call. So my colleague and I bought tickets and are attending for a couple of hours yesterday and today, to ensure most of the business that we wanted to accomplish gets done – seeing our clients (advertisers, wine awards entrants, colleagues, etc) – and then we’re out of there. Were we participating in the show we’d also be selling subscriptions, which we obviously cannot, but it’s forced us to take a look at how we’re engaging the Toronto marketplace and I think we have some great ideas as to how we’ll approach it in 2009. Not participating in this show might work out great for us after all.

Looking forward to Grey Cup on Sunday (GO STAMPS!), which I’ll be able to watch, as my plane lands at about 11am and the game starts at 3:30pm.

Not sure if I mentioned this before, but my wife and I cancelled our trip to Mexico this December. A proactive decision on our part, spurred on by the implosion of the Canadian Dollar vs. the American Dollar. We were scheduled to go to Cancun (the Mayan Riviera to be precise) for two weeks, which we were very much looking forward to, however in our ritual of preparing for the trip (including paying off our credit cards) we wondered aloud if it wouldn’t make more sense, once we’d paid them off, to keep them paid off, and challenge ourselves to run a zero-balance for as long as we could. Basically to be on the plus side and have the cash instead of have the credit. This idea, coupled with a dollar running at 77 cents right now (which would have meant nearly $800 in extra expenses that would have gone to nothing at all) gave us enough motivation to cancel our trip and instead schedule a two-week vacation out to the west coast of Canada, where we can stay for free and spend Canadian money.

This new trip is now planned and we leave on December 5 (two weeks!) for four days in Victoria, followed by four days in Nanoose Bay (at my parents’ house), followed by 4 days in Vancouver. Genuinely looking forward to this, and I’m hoping that I’ll be able to connect with friends and also do some recon for prospective opportunities to get us back out there in the next year or so.

Re: my feelings about Toronto: some may recall my post from earlier this year, where I gave Toronto a hard but sincere monologue, and I stand by it. I don’t mind this city, but I don’t love it. I look forward to visiting it every once in a while, but I would not live here. While Toronto is interesting and worth exploring to add to my perspective on the world, this city does very little for my soul. I think Toronto exists because it must exist – it must be the way it is so things can get done, and for the benefit of the country. It is akin to a powerful diesel bus engine: not beautiful nor inspiring; big, greasy, dirty and smelly. But it works, even in the most challenging of times; it is reliable, and while much of the bus is beautiful, streamlined and attractive, the engine exists and functions in its modest glory to pull the bus where it must go, for the benefit of all its passengers. I wonder how many people actually love Toronto – or how many people could say they love Toronto after having visited other Canadian cities. Sure, it’s exciting, and it has some great restaurants and stores that other cities don’t have which are open late, but… It’s okay that I don’t like Toronto. I am only one person, and I’m certain that there is at least one person out there who does not like things that I absolutely love, and that’s okay too.
I digress…