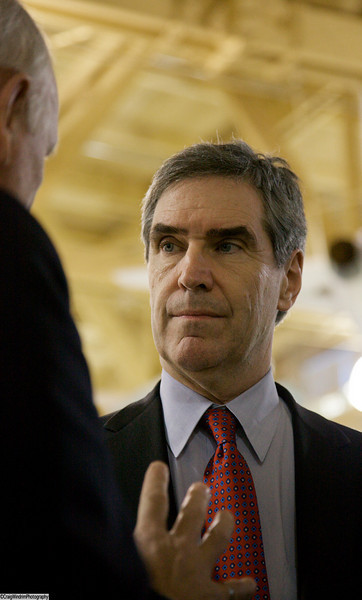 I was busy being politically involved this weekend. Thursday, I visited the Calgary aero-space museum for a hastily-organized  gathering of active Liberal members with a visit from Liberal leader Michael Ignatieff. About 150 of us spent an hour at this event, and I was able to bang off some good pictures of the leader and some members. I was asked by several organizers to send them my best shots for potential use on websites and media. Cool. Spontaneous photojournalism. A few of my better shots are now on my gallery website for your viewing pleasure.

On Friday, I put in a 3/4 work day and then drove up to Edmonton in the afternoon to attend a Liberal Party of Canada in Alberta convention, featuring a Friday-night dinner for, you guessed it, Michael Ignatieff. The dinner attracted a very large audience – reported to be 800 strong – which is very impressive for a Liberal event in Alberta. Other dignitaries at the dinner included Dr. David Swann, Alberta Liberal Party leader and former doctor of Doctors Without Borders, as well as senators and organizers.

Michael Ignatieff’s impressions upon me continue to grow. His oratory skills are superb. He speaks clearly and parlays his messages in very plain terms – exhibiting a sincere belief and understanding of them. His timing is impeccable. His speeches are passionate and deliberate, building up the crowd and also giving them time to pause and think. But the content of his speeches are as entirely wonderful as how he presents them. His arguments make sense. They are rational and sincere. There are no hollow thoughts safely delivered to a predictable audience, nor loose ends, empty promises or rousing hyperbole. And as I discussed with my table and his personal assistant at the hotel lounge afterwards, what he said to his audience in Edmonton backs up and gives reason to what we read and have heard in the media and is the exact same message he’ll deliver in Quebec, Nova Scotia and British Columbia. He’s not trying to convince us of one thing and then a different region of another. His arguments are planned, uniform and are national in scope despite having very localized meaning.

Michael Ignatieff is not just a good politician; he is a good person and he is very sharp, articulate, learned and intelligent. These are the kinds of strengths that every politician wants in their arsenal, but aren’t often realized in politics. They are shaped and honed from a life outside of politics; a life spent thinking critically, writing numerous texts and novels, and teaching at schools like Harvard.

Sadly, most politicians (including Justin Trudeau, whose full potential I fear for for these reasons) are groomed for a life in politics from a very early age, and the basis of the behaviors they learn is how to carefully tread water with very little reality imparted on their reason and character.

Some of the strongest messages from both of Michael’s speeches and the foundational meaning behind them, are as follows:

– He is especially dignifying the West (western provinces such as BC, Alberta and Saskatchewan) and bringing light, sympathy and attention to not only western arguments, but taking an objective, careful and occasionally uncharacteristically western stance on some of them as well

– Michael dignifies the existence and significance of Alberta’s oilsands, but reinforces a middle ground in that we must act responsibly and tactfully yet recognize their national economic impact

– he challenges the conservative methodology behind negative PR and character assassination, and their deliberate divisiveness, lack of transparency and inability to think or plan long-term on behalf of Canadians

Michael’s reasoning behind these messages stem from a central belief in national unity and pure ideology in terms of the role and responsibility of government. His resolve is that the Liberals are a national party and that any governing party ought to represent the interests of the entire nation, not just urban centers or specific, vote-rich provinces. His arguments are in deference to any other party – his success will not depend on bringing down his counterparts in other parties, because they are arguments that fight on real terms for all to see. He wants Canadians to vote for ideas, not in the name of fear. Sound familiar?

The thing about Michael Ignatieff is that he is not so shallow as to simply spin successful arguments from south of the border. His arguments are concentrated, deep and sound. They reflect critical thought emanating a very thoughtful person, and make him a very easy person to vote for and elect. It is little wonder that the Conservatives are taking their time to see where they can attack from, and what foibles they can latch on to. Because Stephen Harper does not campaign on what he stands for – that much has been proven several times in the last few years. Stephen Harper has previously campaigned on how poor Canadians’ alternatives are and why he is the only sensible choice, however these days I feel a wind of change on our horizon, and it’s not simply another southern Alberta chinook.