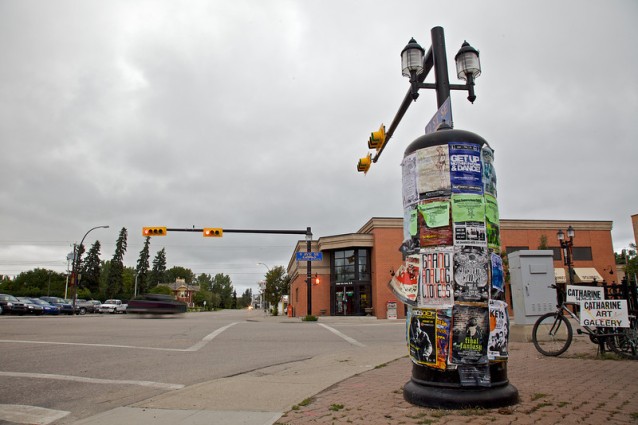 We finished the basement this weekend. My lovely wife was a big help, halving the time it usually takes. We’re celebrating with a beautiful bottle of prosecco, and I have a new york strip on the BBQ. My wife is looking forward to a portobello burger.

The basement is now almost entirely vacant, save for our couches, the exercise machine and the TV table (and TV). We’re waiting for a call from the carpet people for an ETA on delivery and installation. In about two weeks’ time, once this is all done, we’ll have a helluva nice basement. And those that visit ought to say so.

Between second and third coats on Sunday, we ventured down to the Kensington/Sunnyside community for a new festival that was receiving some press lately. It was called the Bow River Flow and ran along the side of Calgary’s Bow River on Memorial Avenue. Most of the press it was getting was due to the fact that there had been quite a bit of tension and argument within city council regarding the idea of closing one of Calgary’s main artery roadways to accommodate it. Despite the attention, the festival was sorely – painfully; woefully – bad. The most exciting part was the soliciting of gum samples. Seriously. Signage was in the form of chalk writing on the pathways. Participants and festival stations – whatever they were supposed to be – were non-existent. We kept wondering when we’d get to the actual beginning of it, and never really got there. The same goes for the reasonable crowd that attended. Thankfully the weather was wonderful and we enjoyed a nice walk none the less. Regardless, we couldn’t help but feel embarrassed. In a city straining for cultural legitimacy both internally and abroad, those events that do take place and earn editorial space in the dailies frankly can’t afford to fail to this degree. The councillors who were against closing the street for this event are likely laughing aloud, and those who staked their reputations on pushing this through are looking for somewhere to hide at chamber meetings this week.

In other news, the neighbors down the street have two Aston Martin Vantages parked in the street. It’s not often you see half a million in cars parked street-side. They aren’t theirs, necessarily – I’ve assumed since moving here that the home owner is some sort of exotic car seller. In the past few months, some of the cars gracing his curb have included new models of: Porsche Cayenne Turbo S, Porsche 911 Carrera 4 S, Mercedes Benz E65, and now these Astons; all with temporary license plates. I have pictures – I might post them someday.

I leave this coming Friday for a business trip to Toronto for a week. It’s the 9th incarnation of Canada’s preeminent wine competition – the Canadian Wine Awards. While in The Big Smoke, I’ll likely entertain a few meetings and lunches, as well as helping pour roughly 20,000 samples for our 15 judges. I’m home again on the Saturday of Canada’s Labour Day long weekend, then making a day trip up to Edmonton on the Wednesday, then my wife and I leave for Victoria on the following Friday. It’ll be a busy next couple of weeks but hopefully fruitful.