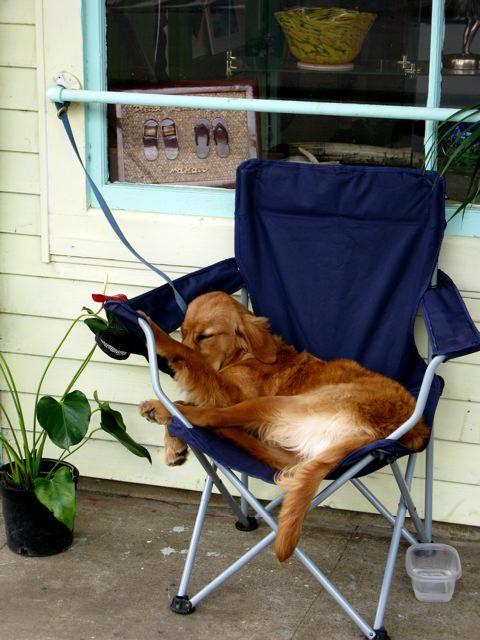 This is not my dog. This was a lazy pooch we came across in Hawaii in January, and clearly displays the lifestyle we enjoyed while there. There’s a foot of snow on the ground here in Calgary that fell over the last 24 hours, so we’re kind of socked in and being lazy today, too.

So my office hockey pool is in full gear. I, along with one of my co-workers, have organized it for the staff for the past three seasons. Luckily (but I’ll take full credit for being good at it), I won last year and finished 2nd the year before.

We have 14 people in this year’s pool, which is a healthy compliment and made for an interesting player draft.

Amongst my players, I have a few Sharks (at heart I’m a Flames fan, but using my brain I come up with a different prediction), a few Penguins, a couple of Canadiens, and a Capital and a Flyer just for good measure. My strategy is to select high-scoring players from teams who I think will go far in the playoffs. It’s paid off the last two years.

This year’s off to a different start. Currently I’m tied for 11th with 23 points; 19 behind the leaders. Not good so far, but I always say, let’s see how many players we have after the first round is complete. We’ll see what happens. If Calgary wins the series against the Sharks, I’ll be out of the pool, but it will have been worthwhile. Should the Sharks prevail, I’ll be in good shape, provided my guys start scoring some points.