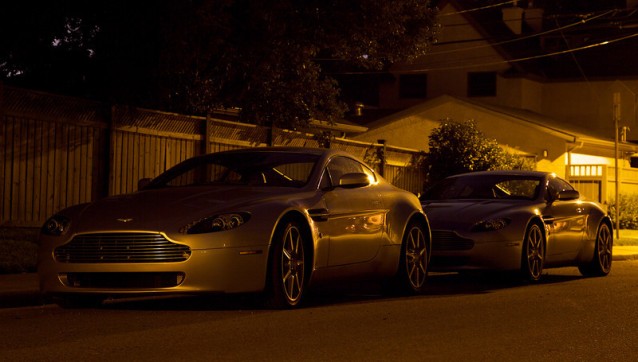 The last in a series of nighttime photographs from several moons ago. These are the ‘his and hers’ Aston Martin Vantages parked a few doors down from my house. They’re in the garage now, for the season I suspect. Reasons why can be found two paragraphs below.

I have several things on my hot plate these days. Enough that I’ve decided to make a cursory update post today, and an opinion post tomorrow. Why confuse, befuddle and otherwise bore you all at once? If you’re looking for ire or groundbreaking news, today’s not the day, and for that perhaps I sort of apologize. I recently finished processing my Toronto and Niagara photos, and will upload them soon.

7 centimeters (about 3 inches) of snow has fallen on Calgary in the past two days. Not unheard of amounts for this city, but in only the second week of October (and the third week of fall), the weather has been rather alarming. Only because of my wife and I’s recent weekend get-away to the mountains did we have enough sense to put on our winter tires last week, which appears to have been a stroke of genius. See, my “all-seasons” are actually summer tires. Furthermore, they are, according to the service person, down to 3/32 of an inch of tread, thus rendering them ‘racing slicks’ as I call them. I was advised at this time last year to replace them for the following summer season, but neglected to mainly because I was adversed to spending $750 on new tires.

If the summer tires had remained on until today, my wife and I both agree we wouldn’t have gotten out of the alley. The combination of barely freezing temperatures and fresh snow makes for the worst kind of road conditions. It’s not icy per se – the roads are actually pretty good, but they are covered by a thick and impenetrable mess of cookie dough and slurpee. These road conditions are imminently familiar to west coast drivers whose one or two snowfalls each year render their cities unnavigable. We often poke fun when Victoria receives an inch of snowfall – but it is driving on days like today that we should remember in those circumstances. Coastal residents don’t even have winter tires, nor experience driving in the snow, nor city infrastructure to clear the roads (not to mention steeper road and driveway pitches). Despite a fleet of snow plows and sanding trucks, several roads remain impassable today in Calgary – particularly those on hills. Busses are jack-knifing an fender-benders are halting traffic on literally every major artery. Chaos.

But things look like they’re about to turn around in spectacular Calgary fashion – a high of +21C is forecasted for Saturday. Whut?!

So yes, my wife and I spent a couple of days at the Chateau Lake Louise this past weekend. The Chateau and Lake Louise itself are an iconic retreat in Banff National Park, near the Alberta/BC border. The lake contributes to the Bow River, which provides nearly all of Calgary’s potable water. The source of the lake is the Victoria glacier, whose face is the view for the lucky guests of the Chateau. I’ll get more into the history and geography of the place once I have my pictures up, which ought to be in the next week or so. We spent our three days generally relaxing, doing some life strategy planning (as we did at the same venue last December) and some hiking. I was fortunate enough to slip on some ice and fall during our hike. Ever concerned about my camera, I ensured it fell on top of me (not the other way around) and thus I punctured and sliced my elbow in three places. A series of band-aids were replaced by a thick slab of gauze yesterday, and things seem to be healing at an acceptable rate.

We’re excited about Moby‘s tour stop in Calgary next week! He’s here to play a relatively intimate crowd of around 1,000 at the University of Calgary‘s MacEwan Hall. Having spent the summer headlining at music festivals for crowds of up to 60,000, I’m sure the Calgary audience will appear somewhat more sublime. Regardless, as I’ve said before, he’s one of the few remaining acts I must see live before I (or they) die, so needless to say, I am looking forward to it.